Brisbane Aboriginal Traditional Owners are alive and well in the 3rd largest city in Australia. The decendents of the well known figure King Sandy Brisbane are on stage in their homeland and worldwide. Below is a simple genealogy of the original people who have occupied Brisbane for 65,000 yrs. 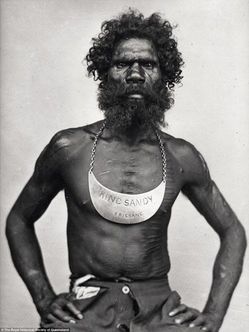 King Sandy of Brisbane aka King Sandy of the Morton's -Turrbal/Bobbera/Boodaperra of Yuggera clans of Brisbane City (b. circa 1820) = Sarah Naewin- Toorbal, Kabi Kabi Pine Rivers and Glass house Mountains region (b. Circa 1820s)
PARENTS of One child - Sarah Sandy/Moreton (b. circa 1845)

Please note that this linage refers directly to Welcome to Country Speaker Shannon Ruska. There are over 500 decendents still living in Mianjin (Brisbane)

The traditional owners of Brisbane have maintained to hold on to their heritage although the colonization began rapidly from 1842. Over 300 convicts were brought to the region and some being the worst in the World. Enduring the changes the Turrbal and Yuggera people were treated to harsh conditions as they become a people 'Lost in their own land'. Restrictions to their own Native hunting grounds, water supplies and then the introduction of new diseases,  massacres, poisonings and nearly destroyed the original people in early Morton Bay Settlement (Brisbane). In fact a song called 'Moreton Bay' can be found on YouTube to give a convicts account of treatment in the area. It was luck for the daughter of Kerwallie aka King Sandy of Brisbane that she was able to marry a Stradbroke Island and Moreton Island natives where more fortunate circumstances seen a safe haven for their children.

Although Sarah passed her days at Elonora Park, Wynnum in 14th March 1907, the same place where her father King Sandy came to to pass on his days in 1900, It was reveled that by 1904 Thomas and Charlie her sons built a house for her in Myora Mission , North Stradbroke Island as her then husband Billy 65 yrs was too feeble to work according to the Myora records.